All Mouth, No Trousers: Telling Tales of Norfolk’s Radical Women Through Stories and Song 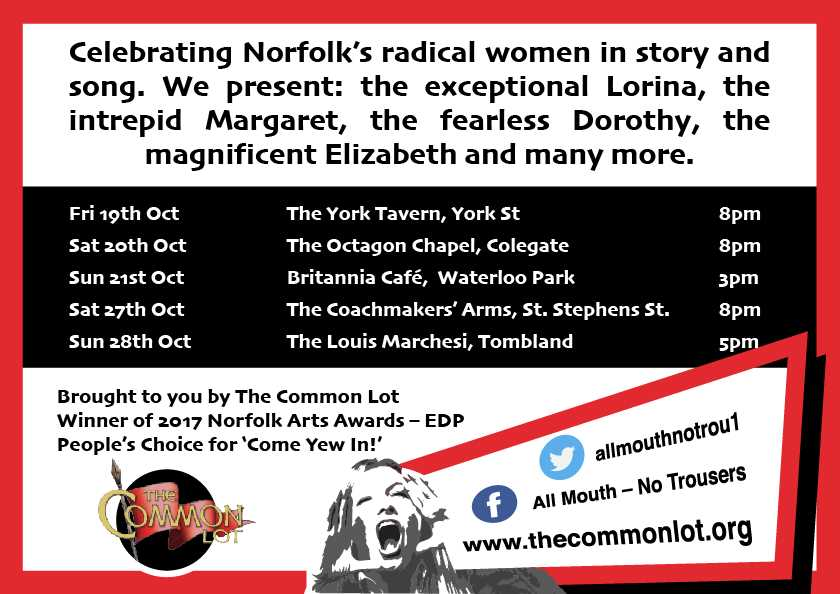 All Mouth, No Trousers is a free theatre project telling tales of Norfolk’s radical women through story and song. An irreverent and joyful celebration, the show will draw on the traditions of cabaret, music hall, dramatic monologue, verbatim theatre and game shows. Composed entirely of original material by local writers it will be performed by members of The Common Lot Theatre Company in the pubs, clubs and coffee houses of Norwich in autumn 2018.

The creative element of All Mouth, No Trousers is underpinned by three months of historical research, which was carried out by a community of citizen researchers under the leadership of Dr Jeannette Baxter, Director of New Routes, Old Roots at Anglia Ruskin University. The research community were particularly keen to uncover stories of female radicalism that have fallen out of the history books, and to make space for ‘silenced’ female voices to be heard alongside those of better-known female radicals.

Come along and hear what Norfolk’s radical women have to say!

All Mouth No Trousers