Since its launch in 2018, an important aspect of Norfolk Welcomes has been the involvement of citizen researchers, who work with Jeannette and Jake by recovering little-known aspects of local refugee migration history. For Norfolk Welcomes 2019, the research focus was The Strangers: a group who came to Norfolk from the Spanish Netherlands as economic migrants and refugees in the late 16th century, who have profoundly shaped the city.

Working with local teachers and educators, the research team developed the research stories into lesson plans, assembly materials, and activities which were openly available to participating schools on the dedicated Norfolk Welcomes 2019 educational site. These learning activities enabled pupils to imagine their own way into history – through letter-writing to historical migrant groups or collectively raising more than £5000, and creating welcome cards for newly settled Syrian families, for example – and to make connections with past and present migration stories, whilst raising awareness of key issues facing migrants and refugees locally and globally.

A vital but challenging part of the Norfolk Welcomes work has been to offer agency and voice to local refugees and asylum seekers. For Norfolk Welcomes 2019, we met these challenges by working with clients from New Routes integration project and families in local schools with a refugee background, as researchers and educational consultants. For Norfolk Welcomes 2019, the poet George Szirtes shared his story of refugee migration with students at Hellesdon High School, who responded by contributing to a cross-school art project celebrating Norfolk’s rich migrant heritage: ‘A Patchwork of Strangers’. 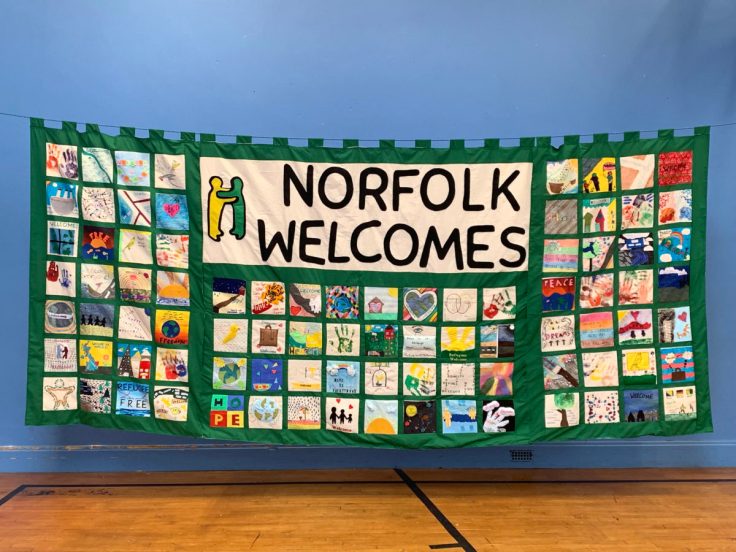 The Norfolk Welcomes project has empowered pupils to become advocates for change in their community and beyond. Amongst other things, their collaborative art project and accompanying documentary were exhibited across Norwich for Refugee Week, a group of high school students were interviewed about the project on BBC Radio Norfolk, and a group of pupils aged 8-11 have given several lectures on Norfolk Welcomes and Schools of Sanctuary to audiences that have included hundreds of local trainee teachers, many school leaders and a group of visiting international teachers.

Norfolk Welcomes has become a catalyst for local people organisations to come together and help build a culture of welcome in the county. Norfolk Record Office, Norwich City FC, Norfolk Education Library Service, University of East Anglia, Norfolk NEU, and many more have all been active partners, and a number of satellite projects inspired by the success of Norfolk Welcomes have evolved. Most notably, Norfolk Record Office have developed a free workshop for Key Stage 2 that has proved very popular, and the UEA host and organise an annual inclusive football tournament featuring eight primary schools. Both were inspired by local histories that Norfolk Welcomes highlighted.